On a Serious Note: Environmental Cost of Fashion 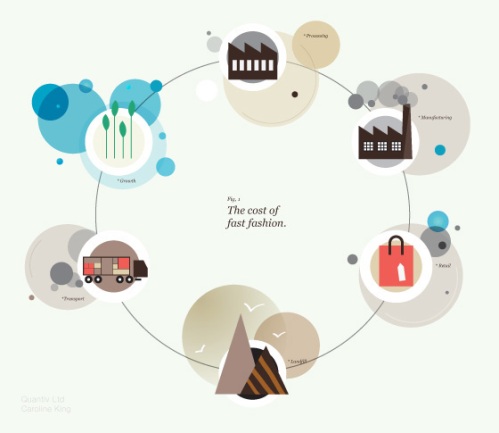 ;
In all areas of life we are now being told to re-use and recycle. Depending on your beliefs, the reasons for this are manifold; global warming, a depletion of natural resources and the exploitation of foreign labour are just some of these. But whereas in other trades the reasons for and levels of consumption are fairly easy to predict and understand, the fashion and retail industries present a more unusual case.
Between them, the USA and UK commit around 12 million tonnes of clothing to landfill each year, and whilst the cotton and linen based garments that make up this haul will eventually degrade with little environmental impact, the polyester and synthetic items are destined for a more drawn out and dangerous end, producing methane in the process, a gas 20 times more harmful as a greenhouse gas than carbon dioxide.
In the grand scheme of things, not so surprising you might think. 12 million tonnes is likely a drop in the ocean compared to the overall volume of say, white goods and technology that are piled on the scrap heap by western economies certainly, but it’s not the comparative volume of this waste that is effecting so much derision, it’s the reasons behind the waste that seem so unnecessary.
Fashion, by definition, is a cyclical and ever-changing market. Since the 50s at least consumers have been attuned to the changes in style that dictate their wardrobe, unlike previous generations where function reigned over form. More recently the opportunity for cheap labour in overseas markets, and the rock-bottom cost of imports as a result has meant that clothes retailers have been able to flood the market with cheaper and cheaper items, rotating stock as quickly as they desire.
Again nothing new in that, most industries change and adapt (for better or worse) to the demands of the market, but because of the nature of fashion an unhappy side-effect of this cut-price clothing is a huge amount of terminal stock – garments that are from past-seasons or late from suppliers and therefore no longer desirable – that is a huge contributor to the clothes that are destined for the landfill. It’s this fashion-based discarding on the behalf of retailers that worries environmentalists, and its knock-on effects include things like:
– The greenhouse gases produced, as mentioned earlier, by decomposing man-made garments.
– The amount of water used to cultivate things like cotton (around 8,500 litres of water for a single pair of jeans) that makes clothes which will never be worn.
– The many other stages of production (pictured) that have a negative impact on the environment.
Of course no-one is begrudging consumers their fashion-fix, particularly when other industries face similar situations and are striving to reduce their own impact on the planet, but the unnecessary scrapping of clothes is one that ought to be addressed, primarily on the side of retailers. Better merchandise planning and re-purposing/recycling of unused stock are a few easy ways to reduce excess clothing, and is up to retailers themselves to initiate.

2 responses to “On a Serious Note: Environmental Cost of Fashion”