Another fun double-style post! The beau and I, as style savvy folks, love getting dolled up and going out on dates. We wore these out to dinner at an amazing DC Meditteranian restaurant called Zaytinya. They had a hearty amount of veg-friendly dishes, served tapas style which meant sharing, and I had my first taste of Ouzo! 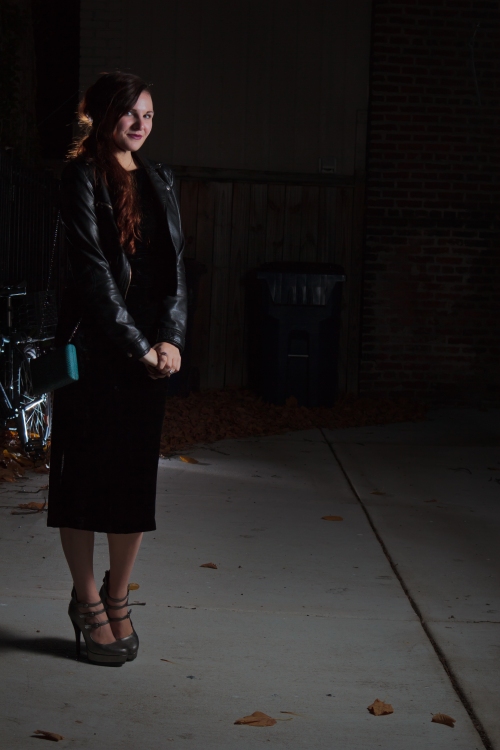 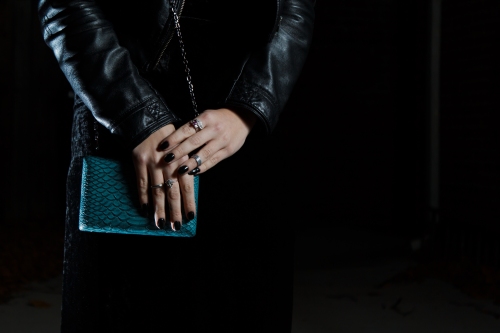 Cover Your Eyes Darling, Do I Feel Right? 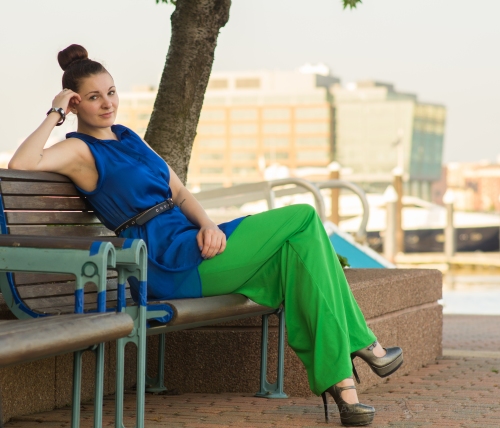 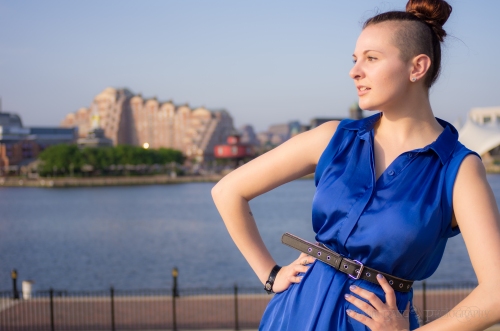 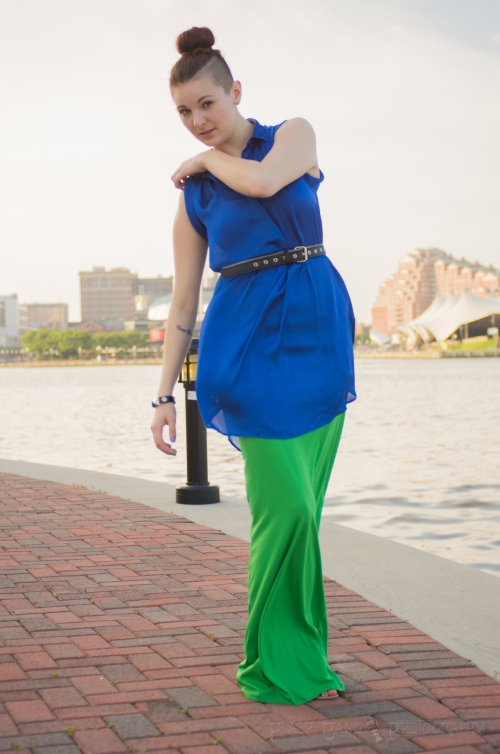 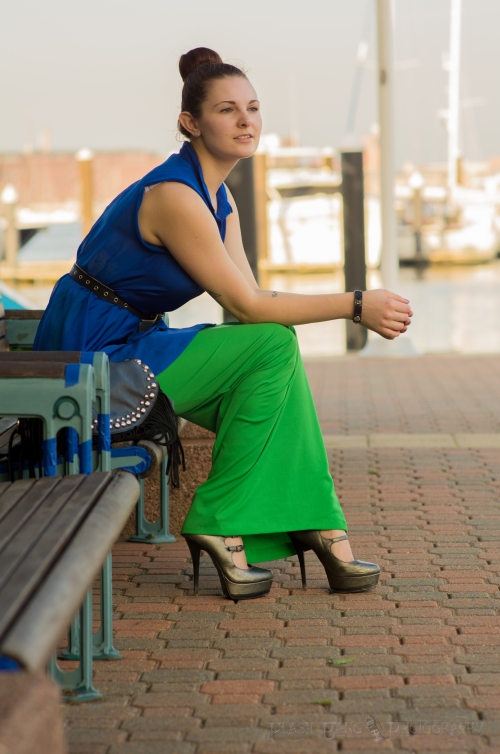 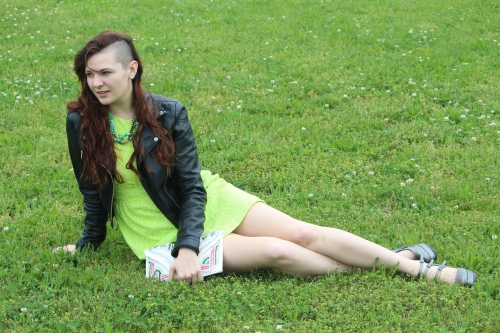 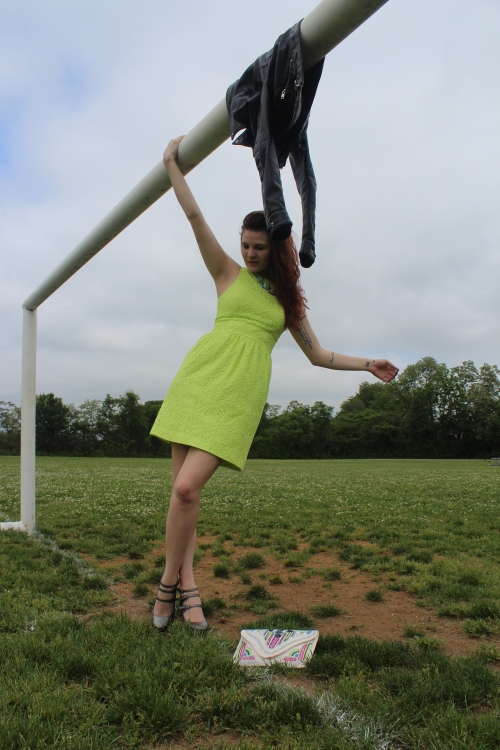 Out of Place, Out of Mind

Today I was excited to do a “fashion” thing in Massachusetts! I was set to go to a fashion show of area designers presenting their version of a “little black dress”. This was to be held in Berlin, MA, which for you out-of-staters who may not know, is a small rural town quite far from the hub bub of the Boston capital. It was exactly what you’d expect; and drastically different from what my still-New-York mind expected.

Middle aged women gathered in their best chunky two inch heels from the 90’s in the old “Town Hall” in various versions of LBD’s (down to their knees). Their hair; either too short to style or in the sleekest of French Twists.

Enter: Sahra. In a mesh, see through leotard with a tucked in maxi skirt and 4″ platform pumps. God, I did not belong. 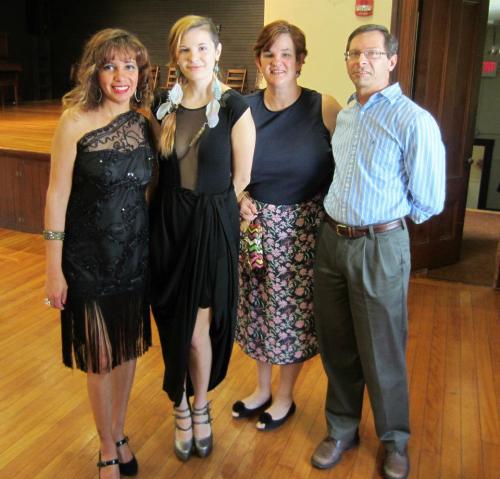 Okay, Okay. There was a good part. The woman who’s dress I went to see was actually spectacular. It was on-trend with a sheer top, low cut sheer back, and fringed trim. Something I would definitely wear and could actually see people in the real world of cities wearing out to a party (to Le Bain maybe?). Sonia, and her line Passion, are exceptional. And the goodie bags were adorable and smelt so great! Sonia and Passion are exceptionally professional and I can’t wait to see her expand and hopefully come to NYC! 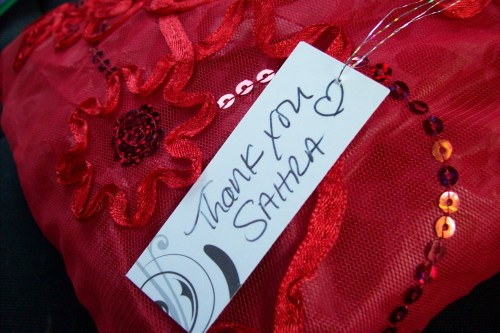 Anyway, I’m clearly out of place here. I hung out with my future NYC roommate last night and all we did was reminisce about The City and plan our future apartment. August can’t come soon enough for the both of us.

After a few quick fashion shows at Greenhouse on Wednesday evening, I headed to Griffin for the Socialyte Co end of NYFW party hosted with Rebecca Minkoff. It was a fun-filled event full of bloggers of all tiers. I mingled with a few of my NYC Fashion Bloggers, including one of our newest members, Kate, who I’d been chatting with for MONTHS and only just now officially met! Drinks were sponsored by Bombay Sapphire gin, with special Rebecca Minkoff/NYFW names! My favorite was called the “Rebecca Minkoff” a, lovely mix of gin and pomegranate syrup. The DJ played throwback hits, having all the ladies dancing around. I got to see Kimberly of Nerd in Heels for the first time since her move to California, and met an amazing jewelry designer, among other industry people. 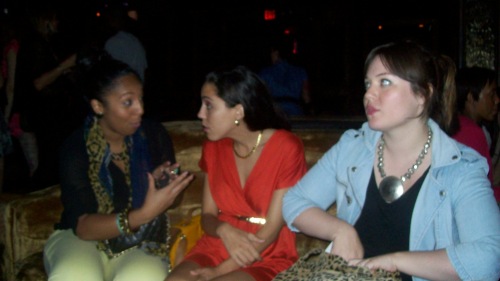 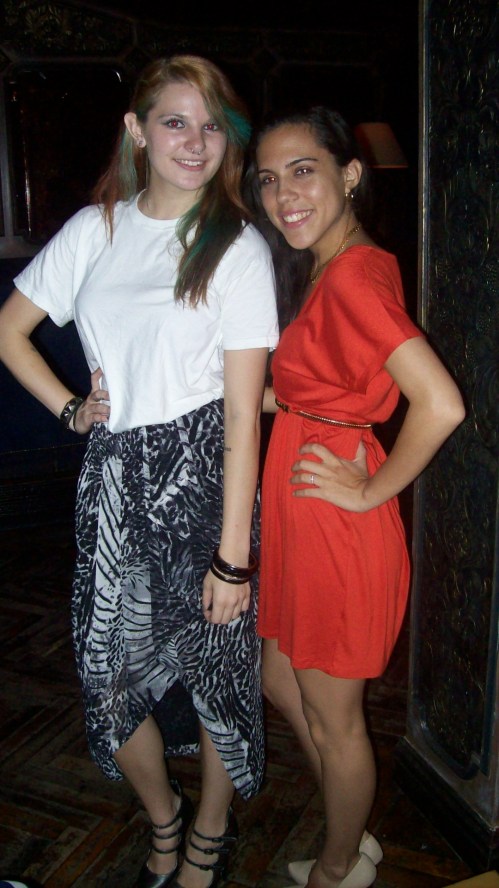 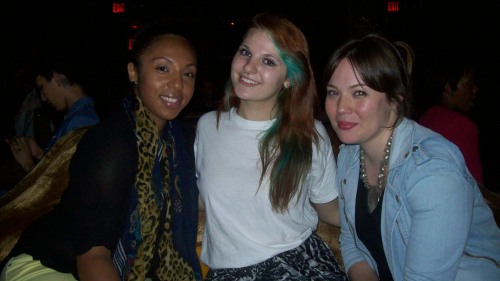 It was a blast, but sadly my NYFW wasn’t quite finished…

So, I digress, I was out of NYC from Friday-Sunday. Yes, during NYFW.  Why? My cousin got married in the mountains of Pennsylvania where I didn’t even have cell phone coverage to check up on the live tweets from all my friends at Lincoln Center.

But, as soon as I landed back in NYC it was GO GO GO. I had an hour to get ready for drinks and dinner, starting at the Bowery Hotel (where I spotted a handsome man…only to notice he’s taken by an adorably casually dressed Emma Roberts) and then dinner at my favorite Giovanni’s Venti Cinque. Dinner was cut short, though, as I rushed down to Avenue for the Boy Meets Girl by Stacey Igel presentation.

I’ve been going to the Boy Meets Girl shows for three seasons now, and have always had a blast. After making it past the outside crowds and proving I was on the list, I walk into a crowded, star studded event. Angela Simmons, Omarion, The Veronicas, NBA players I don’t know the name of…Obviously, as I previously stated I’m not easily swayed by “stardom” so I go about my life as is, seeing what’s left of the collection (I arrived unfashionably late) and mingling. If anyone is familiar with the brand, which you should be, it’s mostly known for the adorable vintage silhouette love-inspired tee shirts and hoodies, so I’ve always viewed these presentations as a fun, relaxing get away from the normal seriousness of NYFW. The event was sponsored by Monster Energy drinks (which I downed a zero calorie 12oz, as was needed), Stoli Vodka having drinks and raspberry-chocolate macaroons (my stomach still doing flips thinking about them) and Neuro Beverages, which I’ve recently become a major fan of. 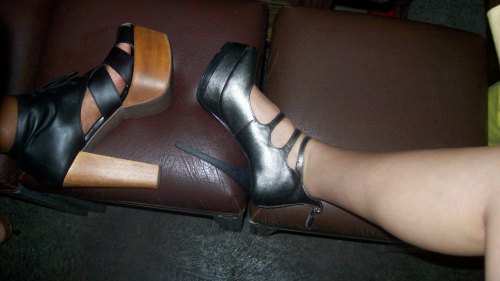 I managed to run into Monroe, and we took a random photo of our shoes, just as the party was dwindling and the club began to shut down. Monroe wore her Jeffrey Campbells, my stillettos were from Wild Pair by Bakers. Obviously, I have the feet of a bound Asian.

Tell Me Girly How’s Your Edge

It’s been a chilly and rainy few days here in NYC and my office is even colder. 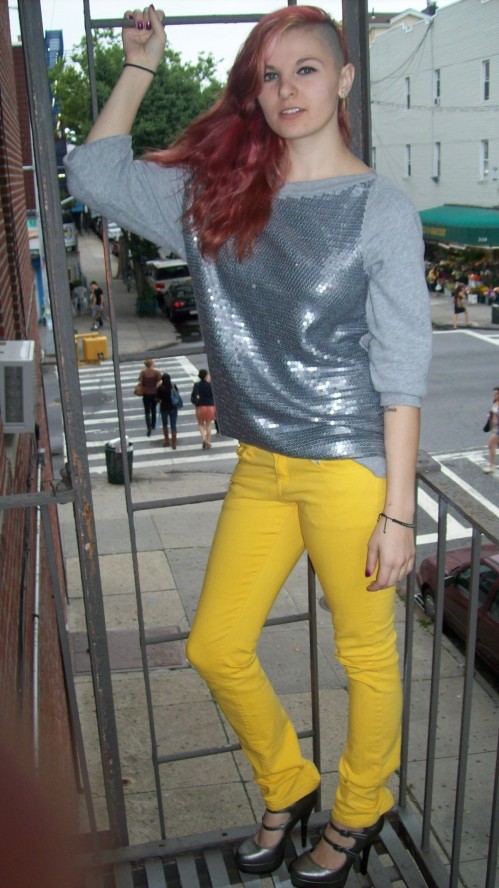 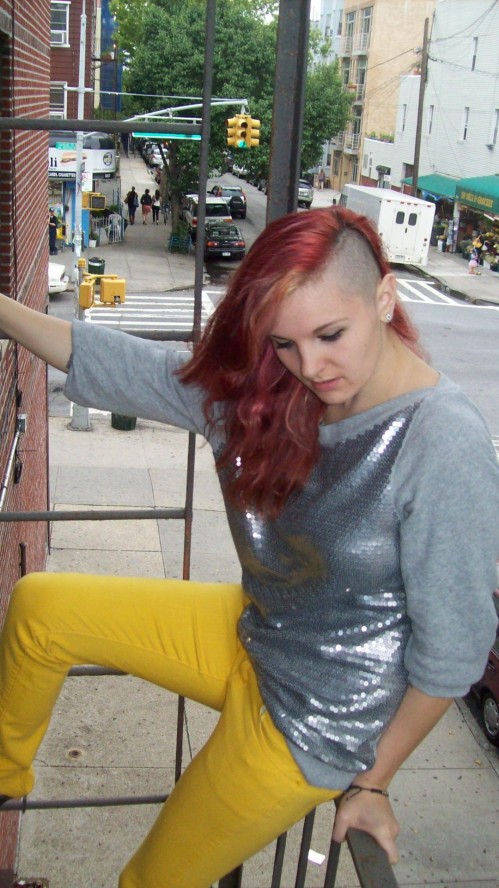 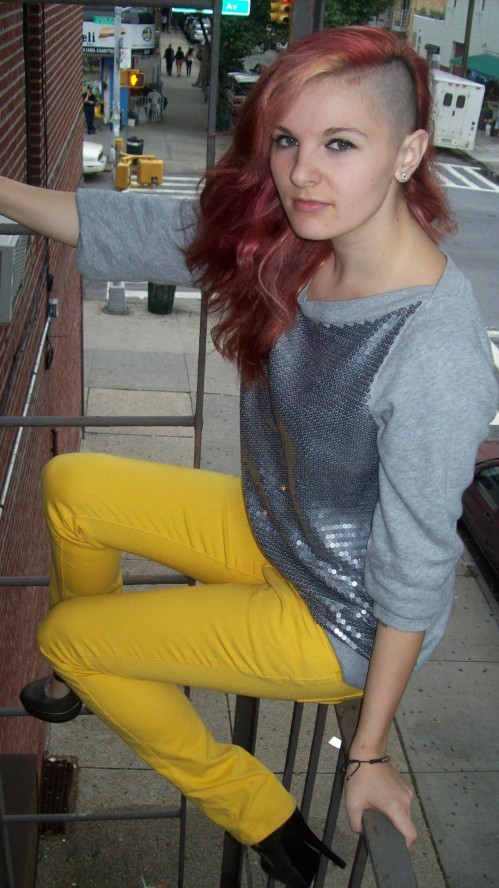 This year was the first time I’ve been in a healthy, quality relationship for Valentine’s Day. As an over-the-top kinda girl, I wanted to go above for a fancy night with my babe. We ate at Felix in SoHo, a delicious french bistro. Actually, it’s the restaurant Adam Sandler peed on in Big Daddy, so the bf was kind of stoked about that. 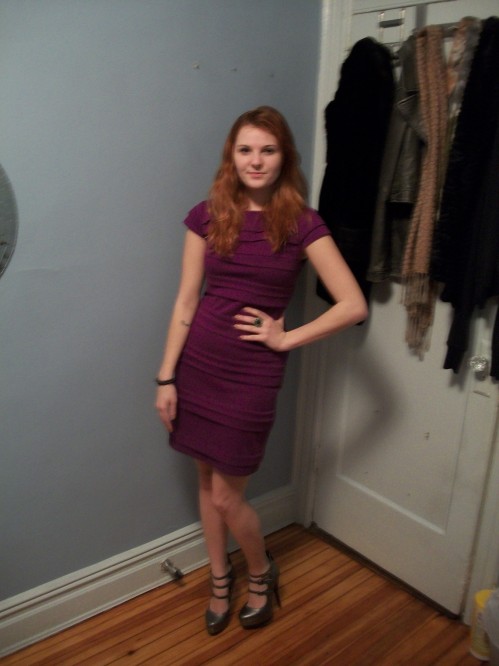 Rose from my BF ❤

Thank god the weather here in NYC has picked up to a 45/50 degree average a day and I was able to go without tights! The dress fit rather well and left room for my imminent food baby.

After dinner the handsome man decided to buy some Patron, which we mixed with Orangina…delicious! Fruity and sweet yet not TOO sweet!